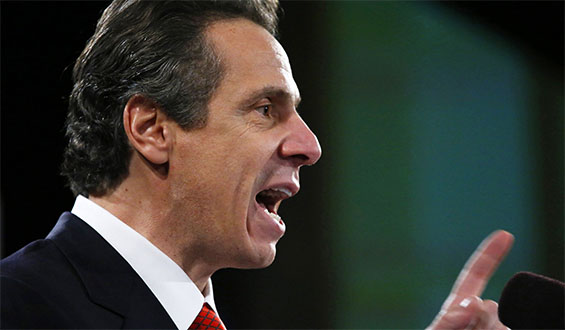 New York Governor Andrew Cuomo has announced a plan focusing on the creation of a state-run education program for inmates in the state’s prison system.
Cuomo first presented the plan two years ago at the State Capitol, but it was left alone after facing opposition from the state legislature.  However, the governor said he has found a way to pay for the plan without receiving the approval of lawmakers.
Around $7.5 million will be given to the program from forfeiture funds from bank settlements controlled by Manhattan District Attorney Cy Vance.

“It’s wrong to put people in cages like animals and waste young lives,” said Cuomo, who announced the initiative along with a seven-part criminal justice plan at Mt. Neboh Baptist Church in Harlem Sunday. “It is insanity, societal insanity, and it has gone on for too long.”

The governor went on to say that if inmates were to work toward a college education it could reduce recidivism, which is currently around 60% after incarceration, writes Corinne Ramey for The Wall Street Journal.

Although critics of the program argue that it is not fair to offer inmates a free college education while law-abiding citizens are working to find a way to afford rising tuition prices, Cuomo remains undeterred, saying if he is told no then he will find another way to pay for the program, writes Erin Durkin for The New York Daily News.
The plan includes an additional $50 million for apprenticeship programs, $100 million to allow failing schools to be turned into community schools, and an increase in the number of re-entry programs for former prisoners in addition to incarceration alternatives like drug treatment and behavioral therapy.
Cuomo released a report last year stating that 109,000 children in the state attend one of the 178 schools continuously labeled as failing due to high dropout rates and low test scores, among other factors.  At that time, he looked toward a plan that would see an outside takeover of failing schools while also making it harder for teachers at those schools to receive tenure.
In his speech this year, he discussed a different solution that would create full-service community schools, adding that students in failing schools need more than just teachers and an education, writes Tom Precious for The Buffalo News.
The total cost of the program is estimated to come in around $170 million.  Cuomo is expecting to face opposition on fiscal grounds, although he did say that the program is cost-effective on a long-term basis, since it costs $68,000 per year to keep one person in prison.
The governor is also proposing that access to the records of people who convicted crimes when they were 16 or 17 years old be restricted once they have stayed out of trouble for at least 10 years.  He would also like to see the age of adult criminal responsibility be shifted from 16 to 18.  He has received opposition to the idea but says he plans to reintroduce the legislation.