Trending
You are at:Home»International UK»China to Conduct Census of Children ‘Left Behind’ Outside Cities 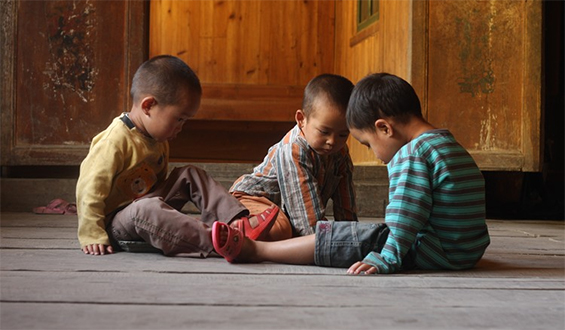 (Photo: Joan Vila, Creative Commons)
The Chinese government is preparing to conduct the first census on the number of children left behind in rural areas while their parents moved to larger, metropolitan areas to seek employment.
The topic was discussed at a seminar in Tianjin last weekend. According to unofficial data, China now has over 100 million “left-behind children,” or those who are being raised without a parent, which accounts for about a third of the country’s total population of kids.
In an interview with Marcel Woo of China Topix, Song Yinghui, a professor at Beijing Normal University, notes that more than 60 million children are left in rural areas either unsupervised or left in the hands of elderly relatives. Another 36 million kids are left living in a city by parents who found employment in another area. These children constitute a real challenge to the social security system, added the professor.
The phenomenon of “abandoned” children is not new in the contemporary Chinese society.  A majority of parents who work in the larger cities tend to leave their kids back home in the countryside due to the higher urban cost of living, unaffordable school tuition fees, and expensive medical care. Parents and children reunite rarely, only on holidays, notes Mugdha Variyar of International Business Times.
Because the numbers are not yet conclusive, a government official confirmed at the seminar that the Ministry of Civil Affairs will conduct a representative survey to identify the exact number of “left-behind” children in the country, writes Sutirtho Patranobis, a correspondent for Hindustan Times in Beijing.
As Huilen Tang of CNBC writes, children growing up without their parents were more prone to physical or sexual abuse, as well as criminal accidents. Multiple studies also found out that these kids were at a higher risk of committing suicide.  In a high-profile case last summer, four siblings in a village in the Guizhou province reportedly committed suicide by drinking poisonous pesticide. They left a suicide note. Liu Wenkui, secretary general of the China Foundation for Poverty Alleviation, commented:

“Left-behind children’s tragedies may hit the front pages of newspapers for a few days, but when the stories go cold, people’s attention shifts. The key to solving the problem is to establish a system to help them and prevent such tragedies.”

According to Liu Xinyu, the founder of the non-governmental organization “On the Road to School”, the government needs to pay special attention to “left-behind children” because the phenomenon exists due to more profound economic and social reasons. However, he pointed out that these kids should not be confused with their peers living in poverty because they lack family care rather than money.
The upcoming census is a sign that the government may put more effort toward helping “left-behind” children.  Earlier this year, the State Council published a circular outlining the government’s efforts to reduce their number significantly by 2020. The Council of Ministers appointed the Ministry of Civil Affairs to head these efforts.