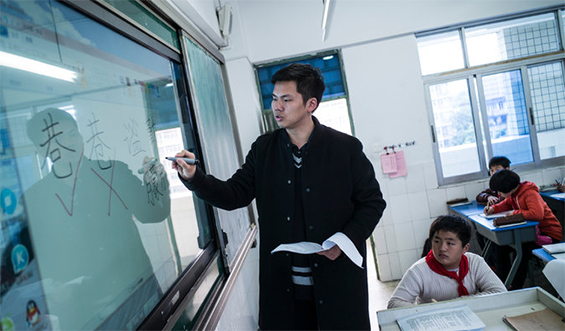 Educators in China are trying to reinforce traditional gender roles and values in the classroom amidst fears that a shortage of male teachers in the country is causing the current generation of boys to become timid, self-centered, and effeminate.
According to a 2012 study by Beijing Normal University, of the 15 million teachers in the country who help mold the minds of 270 million students in kindergarten through the 12th grade, women account for four of every five positions in urban areas.
Schools in Zhengzhou are requiring boys to sign pledges that say they will act like “real men,” while in Hangzhou a summer camp was created by teachers called West Point Boys, which teach Taekwondo classes with the motto, “We bring out the men in boys.”  Schools in Shanghai are experimenting with boys-only classes in topics such as martial arts, computer repair and physics.
Meanwhile, colleges in the city of Fuzhou are bending admissions requirements and offering full scholarships and teaching positions to male students.
The move toward a more male-oriented education system is sparking a debate gender equality and social identity while leaders in the country are pushing for the labor market to become more structured, reports Javier Hernandez for The New York Times.
In addition, it brings up feelings of anxiety concerning boys in Chinese society.  Although boys still outnumber girls in the country as a result of the one-child policy coupled with a cultural preference for having sons, they are consistently behind female students in academic performance.  Many parents are concerned that their sons will not have many job prospects, and believe that male role models will teach them to be assertive, courageous, and to sacrifice.
School officials in the country continue to blame a lack of male role models on the poor academic performance of male students.  Boys typically earn lower scores than girls on their college entrance exams, with academic differences between the sexes showing up as early as the third grade, according to a 2012 study by the Shanghai Academy of Social Sciences.
However, other parents throughout the country are rising up to argue that schools are pushing masculinity and gender norms.  Female teachers are in agreement, saying that trying to attract male teachers by offering additional perks is sexist.

“If women go into architecture, shouldn’t the government give them a free education too?” said Xue Rongfang, a student at Fujian Normal University. “Why should men get this benefit?”

A number of teachers have reported that a high number of female educators, particularly in the younger grades, had a positive influence on students.

It remains unclear as to whether students being taught by a teacher of the same sex have any academic advantages in China.  A 2008 study of 9,000 11-year-olds in Britain did not report any connections between male teachers and higher grades in boys.