Trending
You are at:Home»International UK»Malala Fund, TOMS Team Up For Girls’ Education Scarf 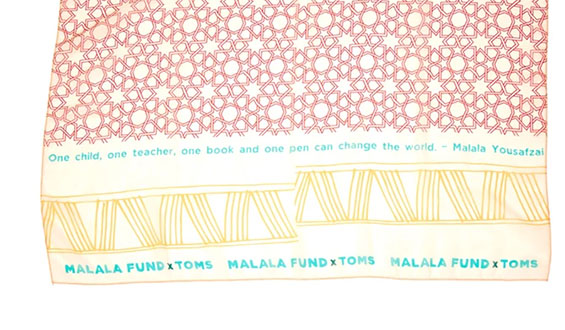 2014 Nobel Peace Prize winner and 18-year-old global advocate for education Malala Yousafzai is teaming up with the fashion brand TOMS to further her efforts to empower young women.
Malala has joined with TOMS to create a scarf to benefit her foundation, the Malala Fund, the nonprofit she started with the help of her father in 2013, which works to help young girls finish 12 years of quality education safely in some of the most vulnerable places on Earth. One hundred percent of the proceeds from her scarves will go toward her nonprofit.

TOMS founder Blake Mycoskie said, “I am so proud to be partnering with the Malala Fund, and the entire movement that was inspired by Malala. Too often young girls can’t go to school because they must work, or they have to marry, or many times there is too much violence around their schools.”

Malala said she was excited about the endeavor, and that the fashion statement could be worn by women across the world, whether as a scarf around the neck or even as a hijab, or headscarf, to show support for girls’ education, writes Krithika Varagur for The Huffington Post.
The scarf, featuring a bold pattern that takes its inspiration from traditional Islamic artistry and prints in addition to a famous quote spoken by Malala, “One child, one teacher, one book and one pen can change the world.” The exclusive scarf is available for purchase on the TOMS website and at store locations in Los Angeles, New York, Austin, Chicago and Portland for $48.
TOMS estimates the net proceeds from each individual scarf will come in between $10 and $15 USD.  According to the website, the company arrived at that number based on the sales price of the scarf minus the costs associated with creation, manufacturing, distribution, and sale, including sales tax, manufacturing, production, and marketing costs, as well as shipping and transportation costs.  However, TOMS said they will donate a minimum of $10,000 to the Malala Fund.
Yousafzai became an education advocate for young girls as a student.  In 2013 she survived an assassination attempt when she was shot in the head by the Taliban while in Pakistan as a result of attending school and speaking out on the importance of education for girls worldwide, receiving international attention.  After founding the Malala Fund in 2013, she went on to earn the Nobel Peace Prize in 2014, using the money she won to open a secondary school in Pakistan.
Sarah Kinonen reports for People Magazine that the scarf has reached celebrity status with stars such as Anna Faris, Sarah Michelle Gellar, and Octavia Spencer all having shown their support by wearing the scarf.
Last year Malala opened a school for 200 Syrian refugee girls in Lebanon through the use of donations from Malala Fund supporters, saying that too many have lost so much already, including homes, family, friends, and schools.  She went on to say that the school would offer the girls a high quality education and ensure they did not lose hope for their future.