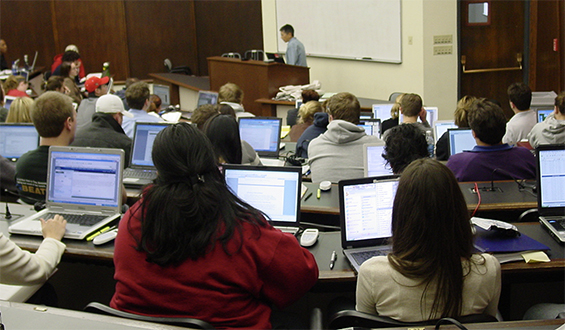 Although the number of tablets being purchased by college students is increasing, a recent poll suggests that the students continue to prefer to use laptops for educational purposes.

Of the college students 25 and older, 27% said they use tablets more often than laptops.

Overall, laptops were found to be the most used mobile device for school work, with 87% reporting the use of a laptop, notebook or Chromebook on a weekly basis.  Meanwhile, 64% said they use a smartphone, 40% use a tablet, and only 15% said they use a hybrid.

Although fewer students said they use tablets for schoolwork, 83% of all college students said they believe tablet use will increase in the future as the devices transform the way students learn.  In addition, 70% said tablets will replace printed textbooks within the next five years, writes Michael Hart for Campus Technology.

Although Internet connectivity is continuing to expand, 8% of Black college students reported not having WiFi access at home in comparison to just 2% of White college students.

The report noted the growth of tablet ownership across the last five years, while laptop and smartphone ownership has appeared to level out.  Survey results show 88% of college students currently own laptops and 85% said they own smartphones.

The survey, “Pearson Student Mobile Device Survey 2015 ,” was conducted over the course of a one month period last spring in an attempt to determine how college students make use of technology for learning.  Over 1,200 college students between the ages of 18 and 30 participated from across the United States.  Survey respondents were enrolled in either a 2-year college, 4-year college, or graduate school.

The survey was part of a larger report that included data collected from students in 4th through 12th grade.