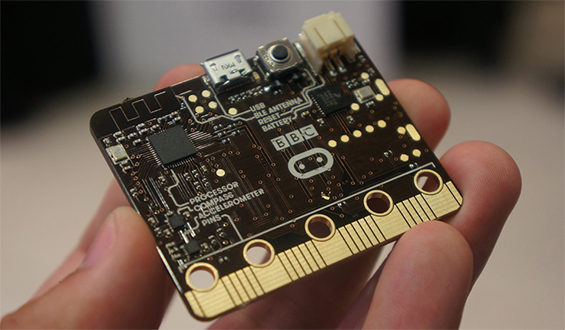 The micro:bit, a tiny, cheap computer designed to teach kids how to program, is now being delivered to schools in the United Kingdom.

In May of 2015, the BBC announced that it would be giving one million micro:bits to 11-year-old Year Seven students in the UK to inspire “a new generation to get creative with coding, programming, and digital technology.” The devices will belong to the students rather than to schools or teachers.

The board, which is so small that it can be incorporated into wearable designs, includes a bank of LEDs, a pair of programmable buttons, a motion-detecting accelerometer, a compass and magnetometer, Bluetooth connectivity, and input and output rings to link to other devices.

Its companion website includes code editors, tutorials, and informative videos to help kids get started using the micro:bit. All they have to do is plug it into a computer to get started. There will also be a forthcoming mobile app.

One Yorkshire school that had early access to the micro:bit sent the board 20 miles into the atmosphere on a balloon and captured pictures from the edges of space. Others have made race cars or combined devices to make a screen, reports Stu Robarts of Gizmag.

The BBC micro:bit has seemingly limitless potential, especially when paired with other hardware, and we can’t wait to see what students will do with it. They’ve already come up with all kinds of ideas during testing and at events around the country– some ideas help solve some of life’s daily challenges, some could have business potential, and others are just great fun.

The BBC will be licensing the design via a non-profit to companies who want to make more, according to Natasha Lomas of Tech Crunch. Its hardware specifications and much of its software will be open source and the device will be available from a variety of retailers. Any profit will be used to “further encourage as many people as possible to join the coding revolution.”

However, the micro:bit was supposed to arrive in classrooms in September of 2015. The delayed release caused concern that teachers may be unable to work the micro:bit into lessons and that the technology may not live up to its educational potential.

The necessity of collaborating with almost 30 partners in its development (including manufacturers, software makers, retailers, and educators) is suspected to have caused the delay. These collaborators include ARM, Barclays, element14, Lancaster University, Microsoft, Nordic Semiconductor, NXP Semiconductors, Samsung, Technology Will Save Us, and the Wellcome Trust.

The Raspberry Pi, a simple computer that has sold five million copies in the three years since its launch, proves that technology to teach programming is popular among educators in the UK and worldwide. As a competitor, the micro:bit was designed to be easier to get started with and to be more tactile and hands-on in its use. The micro:bit can also be used in tandem with the Raspberry Pi, according to Jeremy Kahn of Bloomberg Technology.

While it may seem unusual for the BBC to get involved in education technology, it began the trend in the 1980s when it created a home computer called the BBC Micro.

Rory Cellan-Jones of the BBC News quoted Steve Hodges, a Microsoft engineer who was involved in the micro:bit’s design:

We built a small, low-power ‘embedded’ device, which actually needs a regular computer to program it. In a world of wearable devices, connected gadgets and the ‘internet of things’ the micro:bit is both relevant and yet unusual– just like the BBC Micro was 35 years ago.