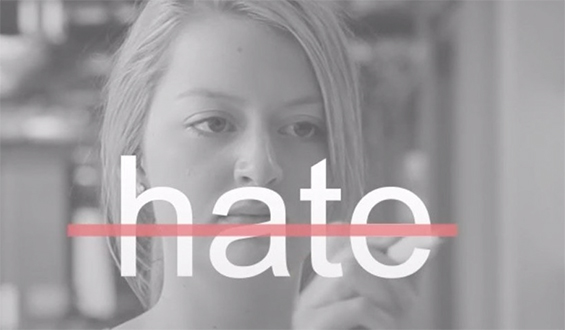 Headspace, the Australian National Youth Mental Health Foundation, has developed in cooperation with Leo Burnett Melbourne a new Chrome extension to prevent offensive language and cyber-bullying on the Internet.

Called Reword, the extension has the potential to change users’ online behavior by stopping inappropriate and inflammatory language. As Gabrielle Sorto of the CNN explains, Reword will flag potentially offensive words by crossing them out with a red line, encouraging users to avoid unkind phrases. In a way, it resembles spellcheck. Chris Tanti, the CEO of headspace, confirmed that the extension would not interfere in anything one does online unless one begins using offensive language:

“Bullying has always existed, but technology has made it insidious — and near inescapable. Online bullies can target victims 24/7 they can do it anonymously and without anyone else nearby to call out the behaviour.”

Reword can be downloaded free of charge and is available for use on YouTube, Facebook, and Twitter. Developers at headspace encourage users to take part in the project by contributing insults and negative words to increase its database and to make it more intuitive.  Internal testing by headspace has shown that nearly 80% of young people changed their mind and were willing to reconsider their word choice after seeing the red line.

Online cruelty and bullying in general are not new trends in schools. However, many tech experts, psychologists and teachers believe that the Internet and social media have made them even more pernicious. Students are more likely to be exposed to online bullying and to have their bullies follow them home or send them offensive messages to their phones.

According to a study by the Cyberbullying Research Center, more than one-quarter of students admit they have been teased online. Another sixteen percent of the participants said they have bullied their peers. Research by the American Association of University Women found out that one-third of high school students had been sexually harassed via social media channels.

According to a research study by the National Children’s and Youth Law Centre Australia and cited by Mel Buttigieg of Yahoo News, cyber-bullying has been a widespread issue in Australia, affecting about 450,000 of the country’s children each year. In an interview with Lauren Mazzo of Shape, Dieter Wolke, a Ph.D. developmental psychologist at the University of Warwick, brought up the serious long-term effects of childhood bullying – personality disorders, anxiety, lack of self-esteem, depression, and more.

As Molly Jackson of The Christian Science Monitor notes, online cruelty is a problem for adults as well as children. The developers of Reword hope it will be widely used on school and company computers to raise awareness about cyber-bullying and help students and users better understand social media etiquette.

Reword is powerful for all age groups because it makes users slow down and think twice, say the creators. It is true that people who troll social media on purpose will never download such an extension, but it could turn into a useful tool for parents who want to make sure their teenagers will think before hitting the “send” button.