Trending
You are at:Home»Higher Education»Muslims Rally for Peace, Tolerance After San Diego Attack 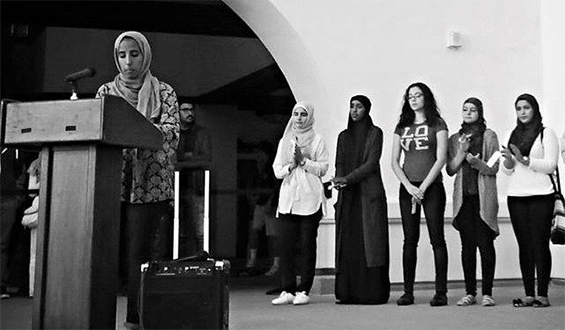 After a Muslim student was attacked last week in what is being investigated as a hate crime, a number of Muslims attending San Diego State University have committed to rallying against Islamophobia.
Campus police believe the attack to have been a form of retaliation after the terror attacks on Paris.  During the attack, a man had taken off a Muslim woman’s hijab, or headscarf, while pushing her and yelling racial slurs in a parking lot on campus.  The attacker, unknown to the woman, was described as a thin, white male in his 20s, with black hair and green or hazel eyes.
According to the woman’s statement, the man approached her from behind and began to choke her with her hijab.  He then told her to leave the country, calling her a terrorist, and added the words “you people bombed Paris.”  Although the woman said no one had come to her aid during the attack, she was thankful for those who supported her at the rally.
The school’s Muslim Student Association held a rally early this week in response to the attack, calling on witnesses to come forward and aid in the investigation.  Around 600 students attended the event, marching from Hepner Hall to the Conrad Prebys Aztec Student Union, where Hanif Mohebi, director of the San Diego Council on American-Islamic Relations, met with the group.
The association is also hoping their peers will “create a more inclusive campus climate by promoting tolerance and acceptance between different cultures and religions.”
Mohebi spoke to the crowd, saying they should not accept the hate and “stupidity,” while Aishah Alsilahi told 10News after the rally that it is important to fight back.  She said she feels that because she wears a headscarf she stands out as a Muslim.  Sarah Al-Khaled added that the group is targeted as terrorists, which she said is not fair because Islam promotes peace.
The Chairman of SDSU Mecha, Carlos Perez, told 10News that it is the same hate used against Chicano, Queer, and Black students, and it is never fair, reports Steve Fiorina.
The group created a list of demands, including  a zero tolerance policy for Islamophobic rhetoric and actions that occur on campus, mandatory bystander training for staff and students, adding additional Muslim coursework in an effort to reduce misconceptions pertaining to the religion, and for school staff members to “address, alleviate and eliminate systems of oppression that disproportionately target people of color, women and all marginalized students on campus.”  The complete list can be found on the groups’ Facebook page, reports Marcia Arcega-Dunn for Fox5.
The association is also pushing for government officials to “recognize that the dehumanization of refugees and scapegoating of the Muslim faith enables an environment for attacks like this to occur.”