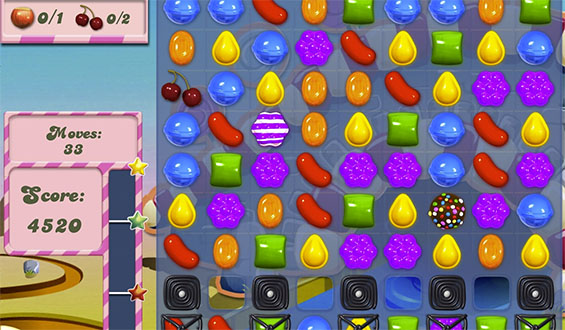 According to a recent study published in the journal Current Opinion in Behavioral Sciences, the year’s most popular video game may also be the worst for a child’s health.
The report, authored by Frans Folkvord, a behavioral scientist at Radboud University in The Netherlands, suggests that games that are related to candy, such as Candy Crush, can increase the number of calories a child takes in, writes Justin Caba of Medical Daily.
On television, the commercials are clearly delineated blocks and that can help viewers resist temptation, but on the Internet, the advertising is combined with other kinds of content, according to Folkvard.
The researcher and his team measured the effects of masked online food advertisements, used by Candy Crush and other games like it, on the eating behavior of over 1,000 children. In between playing these “advergames” in which there were real or embedded food ads, children were given five-minute breaks. During that time they were offered an apple or a piece of candy.
The kids who played the games with embedded food advertisements consumed 55% more of the offered candy. They also ate an average of 72% more calories than children from the control group. Only 6% of the kids realized that the games were complexly arranged advertisements.
The team estimates that two-thirds of primary school-age children play one of these branded Internet games at least once a week. Two years after the study was completed, there was no effect on the candy-eating kids’ body mass index (BMI), but the children who chose an apple over candy had a lower BMI.

“Children play a game, get hungry and reach for treats. As the cycle continues, children fail to learn healthy eating behavior,” Folkvord added. “The results of my study indicate that these advertisements have an even heavier influence on children who are already overweight.”

Folkvord is joining with the University of Barcelona to convince the European Union to begin discussions on how to prohibit food commercials that target children. Fans of Candy Crush point out that there are hundreds of other match-three games out there that are not centered on unhealthy foods.
The researcher added that supportive parenting can make a difference in this behavior, reports Conner Flynn for Geeky-Gadgets.
According to an article published on the National Center for Biotechnology Information (NCBI) site by Debbe Thompson, Ph.D., of the Children’s Nutrition Research Center, Pediatrics, Baylor College of Medicine, there are what is known as “serious video games.” Thompson said that this technology may be able to offer an effectual method for young people to adopt healthier behaviors.
The new genre of video games target health behaviors by combining entertainment with such components as goal setting and problem solving. Dr. Thompson and her colleagues have been developing and evaluating a variety of “serious” video games and other technological interventions for childhood obesity prevention for several years.
Although the team acknowledges that developing these video games is difficult, time-consuming, imposing, and exhausting, it is also a niche in the video game arena that can make a difference in a child’s weight, eating habits, and overall wellbeing. She says this may be a huge step in the right direction for the juvenile gaming industry.