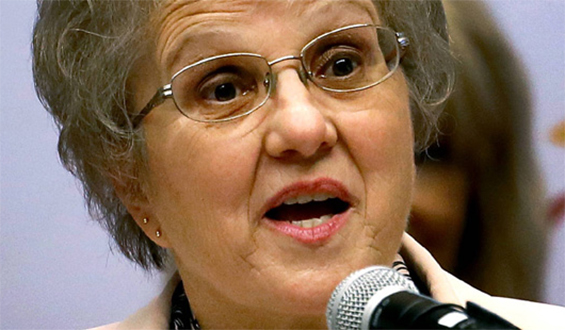 Arizona Superintendent of Public Education Diane Douglas is making waves once again with vocal opposition to a new measure suggested by state Sen. Jeff Dial (R-Mesa) which she says will strip her of many of her duties.
Howard Fischer reports for The Arizona Daily Star that Dial’s proposal would allow the state Board of Education to assume those duties, which Douglas says would be a mistake since the board, most of whom are appointed by the governor, meets only one time each month.
But Douglas, already involved in two lawsuits with the Board of Education, suggests that the real motive is to save the Common Core standards approved by the board six years ago, which she has been trying doggedly to eliminate. In fact, Douglas campaigned for her current position on a platform based on repealing Common Core.

“Having successfully faced a primary election, a general election, a pathetic recall effort and an ongoing lawsuit by the state Board of Education, I am stunned that a so-called conservative Republican would try to reverse the will of the people,” Douglas said in a prepared statement.

Dial said he was only attempting to clarify apparent conflicts in the state’s law as to defining the powers of the board and those of the superintendent. These conflicting interpretations have been the source of the contention that resulted in two lawsuits.
One of the lawsuits concerns who is appointed to control the board’s staff. Douglas is of the opinion that the superintendent is in charge of hiring and firing board members, but Dial noted that Douglas is elected by the citizens of the state and the board is appointed by the governor.
Dial’s Senate Bill 1416 would clarify the state’s ruling to give the Education Board absolute control over its staff. The Senate Education Committee approved the measure 5-2 and sent the bill to the full Senate for a vote, reports Ricardo Cano of The Arizona Republic.
Douglas countered in a statement that the legislation was anti-parents, anti-children, anti-education, and anti-democracy. She labeled the board irresponsible and said state teacher investigators, who work under the direction of the board, had incorrectly recorded in state or national databases approximately a third of their probes into teachers’ work history and disciplinary actions incurred.
The erroneous reporting includes teachers who could have: been disciplined for improper relationships with students; been sentenced for sex crimes against minors; taught under the influence of alcohol; taught inappropriate material; or physically harmed students, according to another article by Ricardo Cano.
Douglas continued that the bill was shocking and repulsive. In spite of the fact that Douglas is Republican, she lashed out at Dial for being “anti-Common Core and Republican on the ballot, but a pro-Common Core liberal in office,” according to The Associated Press.
The superintendent added that the bill would enable two board members to reverse a decision made last year disconnecting Arizona from the 2010 standards, but Dial said her comments had no basis in reality.
The other lawsuit in which the superintendent is enmeshed concerns Douglas’ refusal to allow board investigators remote computer access to research teacher discipline issues. This lawsuit is currently pending in Superior Court, reports Gary Grado of the Arizona Capitol Times.