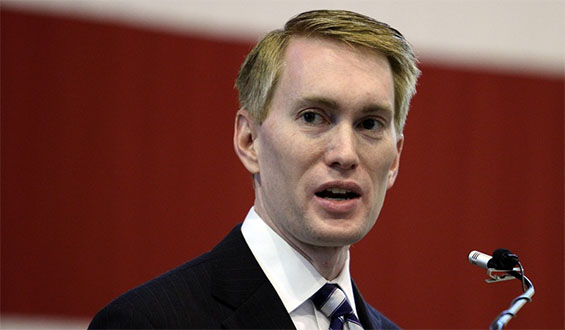 During President Obama’s terms in office, his administration’s Education Department has taken an aggressive stance against campus sexual harassment and violence. The standard has been a quick investigation and the sanctioning of those found to have done wrong, reports The Washington Post’s Emma Brown. But students, administrators, and members of Congress have been critical of what they see as federal officials overstepping their authority.
Still, this position is a move that has been welcomed by many assault victims and their supporters, who have been fighting for more awareness about the sometimes hidden occurrences of sexual violence on college campuses.
Now Sen. James Lankford (R-Okla.) sent a letter to the Education Department questioning whether it exceeded its legal authority by insisting that schools become more pro-active concerning sexual assault. As chairman of the Senate’s regulatory affairs committee and chairman of the Homeland Security and Governmental Affairs Subcommittee on Regulatory Affairs and Federal Management, Lankford argues that rules were violated that regulate how the government makes and imposes its directives.

“I don’t have a sense that the Department of Education is mean or evil,” Lankford said in an interview. “My issue is you have to follow the rules and do this the right way.”

A letter in 2010 and another in 2011 were sent by the Obama administration to universities and school districts laying out the schools’ responsibility to address harassment and sexual violence. These letters precipitated dramatic changes on many campuses.
But some of the conditions became contentious, such as what actions constituted harassment, definitions which some experts said could conflict with students’ First Amendment rights.
Another controversial regulation was that a student who was accused should receive disciplinary action if a significant part of the evidence brought forward suggested that the accused student was culpable. This directive is a far cry from the legal standard of “beyond a reasonable doubt” that prosecutors must prove to convict a defendant.
Writing new regulations is a long and complicated endeavor, and Lankford is accusing the Education Department of circumventing the difficult process because it is “hard.”
Lankford first wants to know if the regulations described in the letters are actually rooted in federal statutes and regulations. Secondly, he wants new Secretary of Education John King to ensure that schools that fall short of the new policy prescriptions are not going to be penalized, reports Andrea Eger of Tulsa World.

“I condemn all types of sex-based discrimination, including sexual violence and harassment, in the strongest possible terms, but believe that the ‘Dear Colleague’ letters advance substantive and binding regulatory policies that are effectively regulations,” Lankford said.

The senator believes that the guidance sent to schools include policies that work against the common administrative goals of safety in schools and gender equality in education as set forth in Title IX. Lankford added that Harvard University law school faculty and law school professors from the University of Pennsylvania had legal concerns about the “letter-issued” policies.
A staffer in the office of Sen. Lankford said the congressional subcommittee that the senator chairs is taking the matter all the way up to the Secretary of Education’s office because, at this point, colleges and universities are facing a “David and Goliath proposition.”