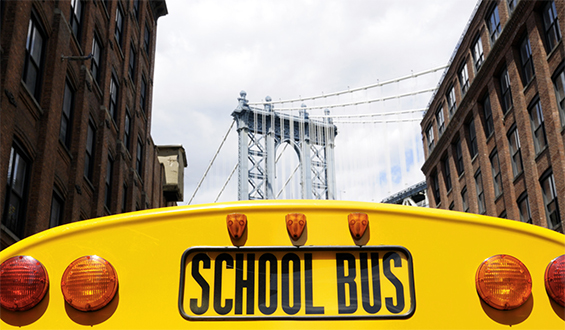 Officials for the Department of Education have reported a decline in the number of suspensions handed out in New York City schools last year, which fell by about 9,000 suspensions, or 17%.
According to the department, a total of 44,626 suspensions were issued during the 2014-15 school year compared to 53,000 for the 2013-14 school year.  The decline is a continuation of a pattern in recent years, as suspensions for the 2011-12 school year totaled 69,643.
City schools Chancellor Carmen Fariña announced a plan earlier this year to upgrade the discipline code in place in public schools.  The plan included additional staff training in conflict resolutions well as efforts made to reduce the number of 911 calls made, reports Elizabeth Harris for The New York Times.
Under the new plan, permission from DOE headquarters must be received by any principal looking to suspend a student who “defies authority.”  Members of the police department are now required to report whenever a student is placed in handcuffs.
Schools must also have a “de-escalation plan” in place that offer positive outcomes for situations before a suspension becomes necessary.  Additional guidance counselors are also required to be on hand to offer aid to students who are dealing with court proceedings or are incarcerated, writes Amy Zimmer for DNAInfo.
The plan also requires the creation of “School Climate Leadership Teams” who will review the effectiveness of reforms.
The DOE also reported a decrease in the number of school arrests and summonses made by the School Safety Division this year.  School arrests were found to be down by 27%, with summonses down 15%, writes Lisa Colangelo for The Daily News.

“Reducing the need for suspensions and keeping our schools safe remains one of my top priorities — particularly for our black and Hispanic students and our students with special needs — and we are working tirelessly toward that end,” said Chancellor Fariña.

While supporters applaud the decrease in overall suspensions, they argue that the black student population is still being affected at a higher rate than any other student demographic.
Suspensions issued to black and Hispanic students total 23,068 and 15,966, respectively, for this academic year.  Officials for the Education Department report that white students were suspended a total of 3,306 times and Asian students received only 1,687 suspensions.  The same trend was seen for the 2013-14 school year.
Although black students account for almost 52% of suspensions for the 2014-15 school year, they only make up 26% of the city’s school population.
In order to better handle this situation, student organizing group Urban Youth Collective suggests additional training for teachers that incorporates “a racial and gender lens.”
Police Commissioner Bill Bratton said the downward trend of suspensions was a direct reflection of efforts made by the NYPD to create a constructive school environment for students.  Bratton added that the department plans on continuing its work with school and city officials with the goal of offering all students access to a “secure educational setting that fosters their academic achievements.”