Trending
You are at:Home»K12 Schools»Success Academy Charters Accused of Pushing Out Problem Kids 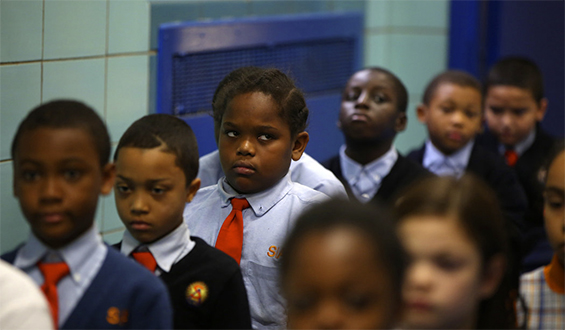 A Brooklyn girl who attends Success Academy charter school has struggled since kindergarten to adapt to its strict regulations. Her demerit list has grown because of not following directions, throwing tantrums, throwing pencils, and disobeying teachers. But when principal Candido Brown said she would have to call 911 if the girl continued this bad behavior, her mother withdrew her from the school immediately.
New York City’s Success Academy is a high-performing charter school network. But it has suffered accusations that its accomplishments are due to the practice of “weeding out” likely to fail or difficult students, reports Kate Taylor of The New York Times. Success Academy has denied that this is the case, but interviews by The New York Times and documents obtained by the paper’s staff suggest that some officials in the network have zeroed in on students they would like to see leave.
It is hard to expel a child formally from a charter school because the schools receive public funds. The way to avoid this difficulty is to suspend a child so often that the parents will give up and take the child out. The principal of Fort Greene Success Academy made a list of 16 pupils and headlined the list “Got to Go.” Later, nine of those students had left the school, says Christopher Robbins, reporting for Gothamist.
Emails obtained by the Times showed that teachers were searching for ways to designate certain students as special needs students so the school could tell their parents it was not equipped to teach them. Although a spokesperson for Success Academy said that school officials rebuked the Fort Greene principal, they also defended the suspensions.
The head of Success Academy, Eva Moskowitz, said her school does not “cherry-pick” its students.

“Similar practices” were reported by current and former employees of other Success schools, the Times says, citing an incident in which a principal at another school “told teachers not to automatically send annual re-enrollment forms home to certain students, because the school did not want those students to come back.”

It was alleged that a school attorney said the withdrawal of one disruptive kid was a “win” for the school.
Charter schools that do “cherry pick” their students create a problem because educators are supposed to help students who are having trouble learning and behaving. Ben Mathis-Lilley, writing for Slate, says he is sure there are many teachers at Success Academy who spend time and energy on helping children.
But charter schools tell parents and politicians they can do a better job than other public schools. Doing a better job makes a case for sending slow learners and poorly-behaved students into the “regular” neighborhood school system.

“So the toxic specter of adult educators viewing certain children as enemies and trying to trick or badger them into quitting is a logical, if not humane, outcome of the incentives involved,” says Mathis-Lilley.

According to an editorial in the New York Post, none of the charges against Success Academy are correct. Only 16 problem kids out of the 11,000 students at Success were on the “Got to Go” list, and the principal who wrote the list was reprimanded.
The paper adds that an Independent Budget Office report found that charters retain more students, including special education students, than traditional public schools.
Success Academy will not let disruptive students keep other children from getting the best education they can get. Students at this network of charter schools are overwhelmingly minority, and the schools are some of the best-performing in the state. Success Academy does not apologize for being a school with high discipline standards.