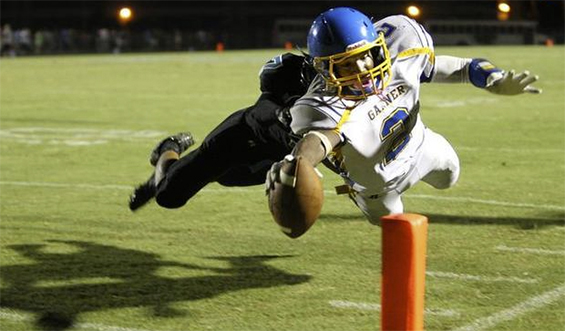 Two doctors from the University of Michigan are making a push for schools across the nation to eliminate their football programs in an effort to reduce the number of sports children are exposed to that could result in concussions.
While Dr. Steven Miles believes banning the sport is an unrealistic option, he does recommend that football be removed from schools, arguing that too many children are coerced into playing the sport by being one of a few large enough to play, or from the pressure of school spirit.  Miles added that 5-20% of players end up having concussions each season.  Instead, he said those pressures to play would not be present in leagues not related to schools.
According to their statement, an average of 240 head impacts are experienced by players between the age of 9 and 12 each season, while high school players average 650 head impacts.  The pair found that just one concussion increases the chances of a second concussion by three or four times, not only for that season but also into the next.  While “catastrophic brain injuries” are rare, they are found to be more common among high school and college players who had previously experienced a concussion.
The statement suggests that a concussion can have a number of negative effects, including reduced academic performance, issues with memory skills, headaches, and an increase in absenteeism.
Miles, a bioethics professor, and Dr. Shailendra Prasad took a close look at studies pertaining to football-related concussions, writes Jeremy Olson for The Star Tribune.  Their statement is currently available online and will be featured in the American Journal of Bioethics.
The American Academy of Pediatrics recently suggested tackle football be preserved while at the same time increasing flag football and non-contact alternatives.  However, the pair do not believe this to be an effective solution, calling it “optimistically speculative” to suggest that neck strengthening exercises among other things would reduce the number of concussions that occur each year without changing the game too much.

“For the Academy of Pediatrics to place the health interests of kids against the design of a sport just seemed quite amazing,” Miles said.

While hockey also has a high rate of concussions, the doctors suggest football requires more of a focus because there are more players.
Miles added that schools are not doing enough to warn students ahead of time of the risks associated with playing the game, including concussions.  He said too many consent forms read like “negligence waivers for a roller coaster,” and suggest that participation is worth the risks with statements like “everything in life has risks.”